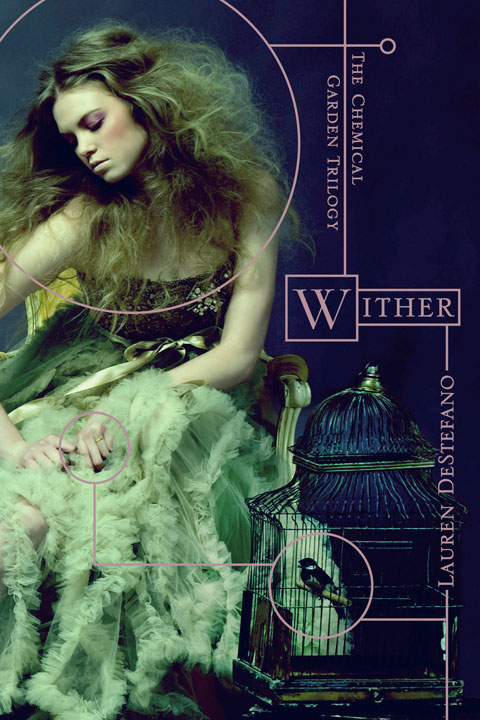 “What if you knew exactly when you would die?
Thanks to modern science, every human being has become a ticking genetic time bomb—males only live to age twenty-five, and females only live to age twenty. In this bleak landscape, young girls are kidnapped and forced into polygamous marriages to keep the population from dying out.
When sixteen-year-old Rhine Ellery is taken by the Gatherers to become a bride, she enters a world of wealth and privilege. Despite her husband Linden’s genuine love for her, and a tenuous trust among her sister wives, Rhine has one purpose: to escape—to find her twin brother and go home.
But Rhine has more to contend with than losing her freedom. Linden’s eccentric father is bent on finding an antidote to the genetic virus that is getting closer to taking his son, even if it means collecting corpses in order to test his experiments. With the help of Gabriel, a servant Rhine is growing dangerously attracted to, Rhine attempts to break free, in the limited time she has left.”
—————————————-

Considering that we’ve had three dystopia novels as our Book of the Month this year so far, it’s obvious that not only is dystopia a hot topic, but there have been some amazing novels released on the subject. Wither by Lauren DeStefano is no excepetion.

Sixteen year old Rhine is only four years away from death. Thanks to a genetic flaw, all women die at 20, men at 25. She soon finds herself kidnapped – taken away from her twin brother in New York and sold as a bride to Linden Ashby. Trapped in a polygamous marriage, which has become normal in society, with only four short years left will Rhine resign herself to a life in her mansion prison or will she fight her way back to her brother?

Though I have loved many of this year’s dystopias, their societies resemble one another in a way, so there was always something familiar about each book. About a quarter of the way into Wither it struck me just how original and different the concept was. I can’t say the story was like anything I’d read so far.

From the writing, to the world building, to the characters, Wither was phenomenal – to say I was impressed would be an understatement, I was hooked from the first chapter.

Each character added the light and dark to the story and was so well developed and distinct – even the minor characters left an impression.

The idea of three girls living in a polygamous marriage with their husband is quite dark and strange but was so fascinating and very well presented. The friendship between the sister wives developed slowly but was beautiful to see, but also bittersweet.

Wither has the kind of concept that makes you think. How would you react in that situation? Would you stay, or try find a way out? You find yourself constantly changing your mind about whether you feel Rhine should stay or go, which shows just how involved you become in the story.

The relationship Rhine has with Linden and Gabriel were definitely contrasts but interesting to see how they developed. I’m still not completely sold on how she feels about either- I wonder how much Stockholm Syndrome and proximity played a part, but we’ll just have to see how all that unfolds as the series goes.

It was so nice to pick up a novel with a beautiful cover and not feel betrayed by it – Wither is just as amazing on the inside as it is on the outside.

Dark, emotional and incredible. An absolutely compelling and fantastic novel.

Teaser Quote: “She smiles at our husband as she moves, and he blushes, overcome by her beauty. But I know what her smile really means…Her smile is her revenge.”