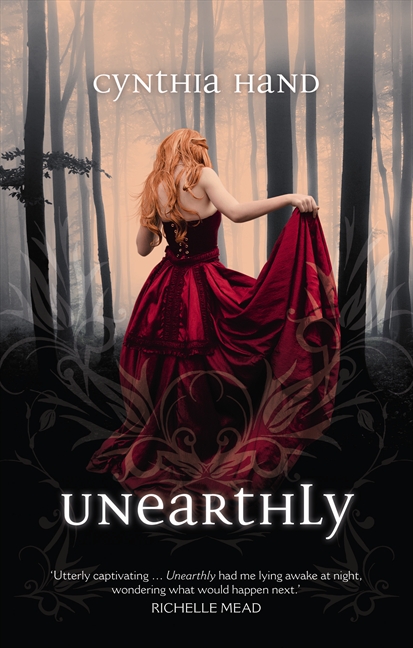 “Clara has known she was part-angel ever since she turned fourteentwo years ago, but only now is her purpose – the crucial rite of passage for every part-angel – becoming clear to her. Clara’s purpose leads her family to Wyoming, where amidst terrifying scenes of a bush inferno, she finds a boy of her visions, Christian. He’s everything she could wish for – so why does she also have feelings for her enigmatic classmate Tucker?

Clara discovers that her purpose is only a small part of a titanic struggle between angels and their destructive counterparts, the Black Wings. And when the fire of her visions erupts and both Christian and Tucker are in danger, who will she choose to save?”

Under normal circumstances it would only take Richelle Mead’s praise of a book on its front cover for me to say “Well, enough said, I’m reading it!” But it wouldn’t be much of a review if all I wrote was “Richelle Mead says so, READ IT.”

Till now, most of the books I’d read about Angels had been lackluster to fairly decent but nothing that I completely loved, Unearthly changed all that.

Clara has known she was part-angel for two years now and finally, she has begun having visions which are the clues to her ‘purpose’. These visions are cryptic and her purpose isn’t quite clear, only that she sees a boy standing in a forest area that’s about to be engulfed in flames. Who is this guy? Where is the forest? Why is he there? What’s she even meant to do once she’s there? That’s all up to Clara to figure out.

If I could use just one word to describe this book it would be refreshing. Everything from our main character Clara, to the love interests, to the use of angel mythology were so well done it makes this book a stand out amongst its genre.

The storyline was artfully done, with a perfect blend of realism with the supernatural. The writing is easy to read and amazingly captivating – just when you plan on reading one more chapter, you find yourself reading another hundred pages instead.

Some moments were quite suspenseful and I found myself gasping out loud or yelling at the characters hoping in vain that they’ll hear my warnings, but of course, that’s as useful as when your Dad is yelling at players during a football match on tv – they can’t hear you.

I loved that this wasn’t one of those, anti hero, I’m-coming-to-terms-with-these-new-powers-which-by-the-way-I’m-awesome-at-but-waaaa-my-life-will-never-be-the-same-kind-of-books. Clara’s known about her angel abilities for two years already so has had time to adjust to the idea and all the extras that go with being a part-angel, but she still has a lot to learn.

I was also very glad that her family was not only well aware of Clara’s purpose and part-angelness but that they were also part-angels. It was nice that it wasn’t some secret that she had to tip toe around and make lame explanations to cover up.

Clara herself is a completely likeable, down to earth and strong character. Her angel blood means she can naturally excel at things most people have to try very hard to master, but there are other things she really has to work for, especially when it comes to her own angel powers. She’s witty, especially her banter with Tucker, she’s not rebellious but definitely has a mind of her own.

The characters in Unearthly are so well done, each of them being much more than just props to Clara’s story.  They have their own minds and their own issues and goals that they’re working towards so that within the story they’re living with Clara not for Clara and her story.

From the blurb we gather that there are two guys who could be potential love interests. When I saw that I groaned because I’m soooo tired of love triangles. The way the story pans out in Unearthly though is quite unique and though it seems it, it doesn’t conform to what we think of as a normal love triangle. In this case it’s like the characters are just as unhappy about how it as we are.

The love story in Unearthly was so sweet, so beautiful, and once again, absolutely refreshing. It proves that in the supernatural genre you can have a romance that doesn’t happen overnight, or is based on someone just being unbelievably beautiful, or with one of them being stalker obsessed or spineless. I LOVED Tucker….just sayin 😉

Unearthly was extraordinarily fabulous, I’ve used this word a lot so far but I LOVED it. I can’t believe I have to wait till next year for the sequel because a lot was left hanging at the end.  Unearthly proves you shouldn’t give up on the Angels concept by delivering a knock out story that you’ll fall head over heels in LOVE with.

Teaser Quote: “I take a step toward the boy, open my mouth to call his name. He hears me. He starts to turn. One more second and I will see his face.

That’s when the vision leaves me. I blink, and it’s gone.”

Did you think Unearthly was amazing too? Team Tucker or Team Christian? Come discuss it on the forum!