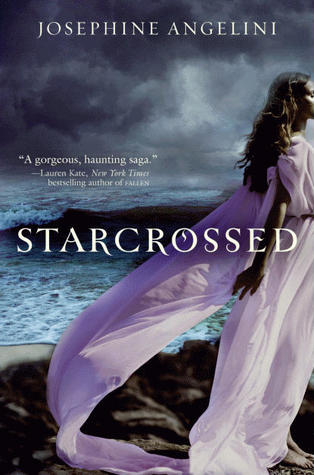 “Helen Hamilton has spent her entire sixteen years trying to hide how different she is—no easy task on an island as small and sheltered as Nantucket. And it’s getting harder. Nightmares of a desperate desert journey have Helen waking parched, only to find her sheets damaged by dirt and dust. At school she’s haunted by hallucinations of three women weeping tears of blood . . . and when Helen first crosses paths with Lucas Delos, she has no way of knowing they’re destined to play the leading roles in a tragedy the Fates insist on repeating throughout history.

As Helen unlocks the secrets of her ancestry, she realizes that some myths are more than just legend. But even demigod powers might not be enough to defy the forces that are both drawing her and Lucas together—and trying to tear them apart.”

Like most lovers of YA fiction, I’m a fan of paranormal romance/urban fantasy. Some stories are amazing, others are….well, lacklustre or cheesy. It’s the not so great stories that then make us PR/UF fans a bit wary when approaching a new story, which was my reaction to first receiving Josephine Angelini’s debut, Starcrossed. The beautiful cover and interesting blurb however won me over and I gave it a shot.

The story centres on Helen Hamilton who, till the Delos family showed up, lived a fairly mundane existence. Upon seeing Lucas Delos for the first time some readers might suspect an instant attraction between the two – you’re half right. Seeing him fills Helen with an overwhelming, all consuming and inexplicable urge….to kill him. And the feeling is mutual.

Which can be problematic when you’re meant to be classmates with someone.

What Helen doesn’t realize is that her life is influenced by the Fates, which leads her to discover not just where she came from, but what’s in store, and the Delos family is only one piece of the puzzle.

My problem with Starcrossed was that I didn’t really enjoy the first half of the book. Helen annoyed me like crazy – her intense shyness, being desperate to fade into the background, she just came across as very weak. There were moments that were predictable or cheesy and I even had a ‘man this is so Twilight moment’ (I know, I know, authors hate Twilight references, sorry!).

After the halfway point things started to get interesting – very interesting. Helen’s character had a total turn around and the twists in the plot only made things so much more exciting. The ending was heart stopping and dramatic, it’ll leave you dying for more once it’s over. There’s so much left hanging in the end it’ll be interesting to see how it will all unfold in the next book.

I loved the mix of Greek mythology, bringing it into a modern setting, it was really well done and totally fascinating to read. The romantic side of the story was also really great but also a lot more complicated than you might expect.

Though Starcrossed and I didn’t get off to a good start, by the end, I really liked it. Mythology, family conflict, fate, a dramatic cliffhanger ending and of course, lurrrrve, Starcrossed has all the right elements for a great read.

Teaser Quote:   “He’s not going around telling everyone you’re monkey-butt crazy, so at least you brutalized a seriously sweet guy.”