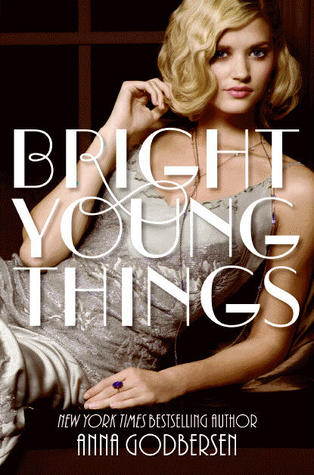 “The year is 1929. New York is ruled by the Bright Young Things: flappers and socialites seeking thrills and chasing dreams in the anything-goes era of the Roaring Twenties.

Letty Larkspur and Cordelia Grey escaped their small Midwestern town for New York’s glittering metropolis. All Letty wants is to see her name in lights, but she quickly discovers Manhattan is filled with pretty girls who will do anything to be a star…

Cordelia is searching for the father she’s never known, a man as infamous for his wild parties as he is for his shadowy schemes. Overnight, she enters a world more thrilling and glamorous than she ever could have imagined—and more dangerous. It’s a life anyone would kill for . . . and someone will.

The only person Cordelia can trust is Astrid Donal, a flapper who seems to have it all: money, looks, and the love of Cordelia’s brother, Charlie. But Astrid’s perfect veneer hides a score of family secrets.

Across the vast lawns of Long Island, in the illicit speakeasies of Manhattan, and on the blindingly lit stages of Broadway, the three girls’ fortunes will rise and fall—together and apart.”

If there was ever a book to make you feel glamorous just by reading it, then Bright Young Things by Anna Godbersen is it.

Set in New York in 1929 during the last summer of the Roaring 20s, the story follows the trials and tribulations of Letty Larkspur, Astrid Donal and Cordelia Grey. Godbersen wastes no time in hooking our attention by stating in the first three pages that by the end of the summer one girl will be married, one will be a star and one will be dead.

Letty and Cordelia have been friends since they were young while growing up in the small town of Union, Ohio. After years of dreaming about it they finally pack their bags and runaway to the big city – New York. Letty is out to realize her dreams of becoming a star on Broadway, while Cordelia plans to track down her infamous father.

Astrid on the other hand is a born and bred socialite and New York City is her playground. She’s got money, looks and charm…..yet why does it not seem to be enough to curb her darling Charlie’s wondering eye?

As the story flutters from the perspective of one girl to the other we get a quite a fascinating picture of what New York was like for a woman in 1929.

Though Cordelia and Letty come to the city with quite different goals, they have naivety in common. It takes them both quite a while to figure out who to trust and what constitutes as a wise decision (in particular with the people they associate with).

On the other side of the social fence is Astrid. Though at times she may come across as fickle or dramatic – she’s really just jaded by her world and the people in it.

One of the things I liked about this book was that even though it was about three beautiful girls it didn’t come across as shallow, insincere or bitchy, pitting the girls against each other over a man etc. Yes, they each have interests in men (hey, doesn’t every girl?) but they had their own moments where their strength, cleverness and independence were on full display.

The fashion mentioned in this book was to die for and created some truly glamorous scenes for us to visualize – everything from the cover, to Astrid’s glittering collection of gowns, to Letty’s dark bobbed hair made the story feel so much more authentic.

The writing in Bright Young Things is rich, atmospheric and artfully done. You’re vividly transported into the sepia toned memories of the 1920s and the story’s dark glamour really shines through.

Though you may get a sense of what might happen next, what actually takes place as the story unfolds can shock you. Since it’s only the first book in the series, and the beginning of the summer, there are still many questions left unanswered.

After reading Bright Young Things you’ll probably feel a strong urge to start calling people Doll Face and Darling and walk around the house with a feather in your hair (but this is not advised if your family is like mine – odd looks will ensue). If historical fiction isn’t normally your thing, this book is a great starting point, plus, the story will charm your socks off.

Teaser Quote: “Well, if you weren’t flirting with him”-his voice had now grown a little plaintive-“who was he, and what did you want with him anyway?”

“If you are so determined to bore me, I may just have to go home.” Astrid sighed carelessly, “What a shame, when I am wearing such a pretty dress.”