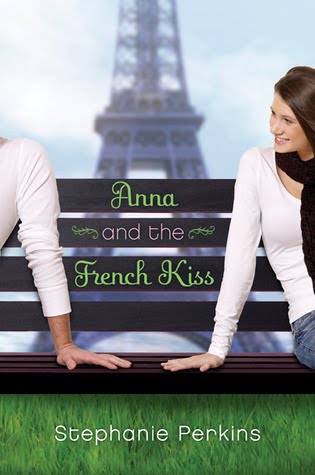 “Anna was looking forward to her senior year in Atlanta, where she has a great job, a loyal best friend, and a crush on the verge of becoming more. So she’s less than thrilled about being shipped off to boarding school in Paris – until she meets Étienne St. Clair. Smart, charming, beautiful Étienne has it all…including a serious girlfriend.

But in the City of Light, wishes have a way of coming true. Will a year of romantic near-misses end with their long awaited French kiss?”

For ages all I ever heard was about this book was mostly OMG SO GOOD, LOVED IT!!! or BEST BOOK EVER. And always in caps lock. After the 100th tweet of that nature, I thought, alright time to bump it up on my TBR pile, this one’s next.

When Anna’s fake tanned, bleached teeth, Nicholas Sparks-esque father ships her off to the School of America in Paris, a French boarding school, she is less than impressed. With no more than oui and crepe in her French vocabulary it’s safe to say she was in over her head.

Fortunately, right after her arrival she meets Meredith and is taken under her wing along with her group of friends – Josh, Rashmi and…Étienne St. Clair. We learn from the blurb all of Étienne’s merits – smart, charming, beautiful, as well as his downfall – Ellie, his girlfriend. Though there’s a spark from the first moment Anna and Étienne meet, he, and any feelings other than friendship, are strictly off limits…or are they?

I guess looking at the story objectively there isn’t anything new being conveyed here -it’s a boy meets girl kind of story, but what Stephanie Perkins does so amazingly well is the story’s execution.  The writing is COMPLETELY absorbing and realistic, but cute, with characters that are endearing and display real emotion that you can’t help but invest your whole heart into their story.

Living vicariously has always been a favorite hobby of mine. After being introduced to a character like Étienne St. Clair, it didn’t take me long before I firmly planted myself in Anna Oliphant’s place. He has an English accent and can speak perfect French; he’s intelligent, witty, loves history and has stacks of books in his room. I die. Oh, and he’s gorgeous.

Sometimes I found it a bit irritating being constantly reminded how beautiful Anna thinks he is but it’s a flaw that’s easily forgiven. Especially since, when you’re that infatuated with someone it is sometimes all you can think about.

Étienne isn’t all perfection though, he has faults and issues that he deals with – some are more serious, like his issues with his dad, others are kind of cute, like his fear of heights.

Anna is a very endearing character; her looks aren’t classically beautiful but reminded me of Georgia May Jagger. She’s smart, funny and a total movie buff with a few neurotic tendencies. She’s strong but has her moments of weakness; she’s brave but sometimes gets scared – scared of confronting the truth, scared of being alone, even scared of feeling things that she knows to be wrong. Though these qualities might be flaws, they are what make her real.

I really loved that Anna and Étienne’s relationship was based on friendship, running slowly and naturally and took time to develop over the course of the year, as opposed to some books that take place in a time span of two weeks and both characters had to work hard for the desired outcome.

The chemistry between these two was electric and yet so sweet. There were moments that were so perfect it made me squirm with excitement making the book a total guilty pleasure, because only in a work of fiction can you create such perfection. This is the stuff daydreams are made of – I’m looking at you chapter twenty.

Sure some parts felt like a fantasy, but they’ve been masterfully brought to life with a dose of realism that let you believe in the story that’s being played out.

When I spotted a quote by Pablo Neruda (uttered by the charming Étienne), this book stole my heart for good. Quotes by Neruda? I die. I totally Rachel-Zoe-seeing-something-amazing die.

Usually, hype makes me nervous; it can set a book up to be a major disappointment. So while I tried not to have high hopes, any fears I had were for naught. I’m sure next time you look up awesome in the dictionary, the cover of this book will be there.  In the end all I can say is – J’adore ce livre!

Teaser Quote: “I mean really. Who sends their kid to boarding school? It’s so Hogwarts. Only mine doesn’t have cute boy wizards or magic candy or flying lessons.”

Did you love Anna and the French Kiss as much as I did? Come share your favorite part in the discussion thread! Click here.