Hey there yaReaders, in the absence of an In My Mailbox post this week (no new books = no IMM) I thought I’d share a few exciting releases…

First is the cover for the companion novel to Anna & the French Kiss, which is Lola and the Boy Next Door by Stephanie Perkins. 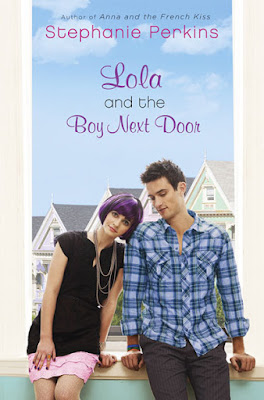 “In this companion novel to Anna and the French Kiss, two teens discover that true love may be closer than they think.

For budding costume designer Lola Nolan, the more outrageous the outfit—more sparkly, more fun, more wild—the better. But even though Lola’s style is outrageous, she’s a devoted daughter and friend with some big plans for the future. And everything is pretty perfect (right down to her hot rocker boyfriend) until the dreaded Bell twins move back into the house next door.

When the family returns and Cricket—a gifted inventor and engineer—steps out from his twin sister’s shadow and back into Lola’s life, she must finally reconcile a lifetime of feelings for the boy next door.”

Check out Stephanie’s blog post here, which includes a hint as to how Lola is connected to Anna.

Next is the sequel to last year’s hugely popular release, Matched which is Crossed by Ally Condie.

“In search of a future that may not exist and faced with the decision of who to share it with, Cassia journeys to the Outer Provinces in pursuit of Ky — taken by the Society to his certain death — only to find that he has escaped, leaving a series of clues in his wake.

Cassia’s quest leads her to question much of what she holds dear, even as she finds glimmers of a different life across the border. But as Cassia nears resolve and certainty about her future with Ky, an invitation for rebellion, an unexpected betrayal, and a surprise visit from Xander — who may hold the key to the uprising and, still, to Cassia’s heart — change the game once again. Nothing is as expected on the edge of Society, where crosses and double crosses make the path more twisted than ever”

So excited for this one too!

Lastly, the first of three book trailers in the lead up to the release of Cassandra Clare’s City of Fallen Angels was unveiled this week. The first one is a recap of the series so far, check it out below, I would love to hear your thoughts.

YaReads is Looking for a New Reviewer/Blogger!

My side of the story…

Blog Tour Nichole - July 7, 2016
0
Hi, everyone! Welcome Back! I am so excited to be a part of the Poor Little Guy blog tour today! I'm pretty big into picture...